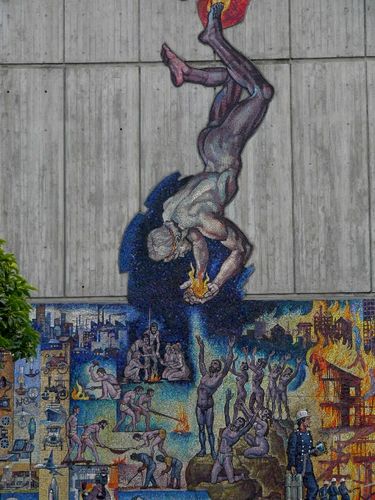 This question must arise, at least for those of us who love nature: are we allowed to enjoy watching it rise up and smite us from the face of the earth?

There are two parts to this question; loving the power of nature and resenting the powerful ignorance of humanity. But they come together when we feel a sense of righteous satisfaction, witnessing the brutal beauty of nature showing us humans just how unimportant we are, in the scheme of things.

Anyone that despises the way humanity has considered itself to be so high and mighty may be forgiven for a sniff of misanthropy. I have always loved the poem Ozymandias by Percy Bysshe Shelley, which places this in context beautifully. Like so many tyrants, autocrats, dictators, oligarchs and bullies before and after, this “big man” styles himself a “King of Kings,” believing his works to be oh so high and mighty. Yet, around the ruins of his sculpted form:

Nothing beside remains. Round the decay, Of that colossal Wreck, boundless and bare, The lone and level sands stretch far away. 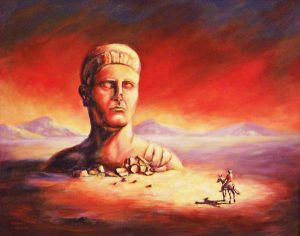 It has been said many times since, but it also applies to us, in smaller, everyday ways. We fade, fast, while life – the universe, our world – lives on. The Biblical chapter Ecclesiastes calls out the ultimate vanity of our ‘conceited self-indulgence’. Jung called out the modern Eurocentric world’s ‘godalmightyness’ while working on the alchemical process as a soul path. Arrogant pride is like a drug and it’s one we’ve always struggled with. The Oracle at Delphi advised not only that we should seek to Know Thyself, but also warned that Surety Brings Ruin – paraphrased commonly as ‘pride comes before a fall.’

And i can’t carry out this conversation without mentioning my main man of antiquity, a genuine culture hero for humanity, Prometheus. A true son of the Goddess, who has the gumption to steal into the heavens and nick out with fire, bringing it back down to poor humanity, who until then were a snivelling lot, living without cooking, warmth or even control over our own interior lighting. That name Prometheus should be engraved in memory forever (oh, wait, the whole point is that there is no future; sorry, i keep forgetting, in so many little ways, every day – that’s material for a future post, no doubt).

But we never learn. Somehow, we seem biologically predisposed to reinvent the wheel of pride every generation, like boys need to learn to run around together and spear kangaroos or woolly mammoths or bears, and if they don’t, they turn into sullen teenagers incapable of better than a grunt …  oh wait, isn’t that exactly what happened when we were banned from taking them out bush for initiation ceremonies? (Yep, another future post, thanks to Paul Shepard and his incredible Nature and Madness; what we’ve lost without initiation ceremonies)

Prometheus: master thief, troublemaker, jester, culture hero. And look what happened to him … chained to a rock for 10,000 years, with his liver eaten out every morning by an eagle, to have it grow anew each day, only to be torn asunder by those fearsome, powerful talons again and again. This is the violence of life and death, as Tennyson declared: Nature, red in tooth and claw! 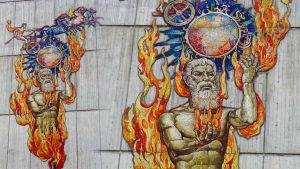 This magnificent Zeus and the imagery of Prometheus is from a mural at the Melbourne Fire Brigade, designed by Harold Freedman.

Bloody Zeus. The gods are ruthless, which is why we must be chained to this rock of earth, bound to the adamantine demands of our myths, strengthened by discipline, determined to suffer unto truth. Not popular, i recognise, compared to donuts, air conditioned buildings, chocolate, fast cars and dishwashers. Understandably. I like all these things too. But that seems to be the rub; easy life, horrible cost. What’s coming, we can see now, is the death and destruction on an unimaginable scale of all that is beautiful in humanity and what we know of the plant and animal kingdoms.

If we deserve it – if we can take some pleasure in watching human civilization unravel – it is mostly because we let powerful bastards run the show. And it’s not like we – the people, most of us, most of the time – wanted this. Power breeds on itself, profit builds arrogance, and while we all share in a little of this shame, it is those ruthless enough to thrill to it that are mostly to blame. However, as we all know, the poor will be more downtrodden, will die first and hardest, while the wealthy who profited the most will watch it on big screens in their bunkers.

What is left, but to enjoy the victory of life over stupidity and to align ourselves with what survives death; some element of spirit, or consciousness, the spark that animated us in the first place, the great mind or the god/goddess matrix, the serpent flying out of the cosmic soup, the light …

It’s nice to have the company of like-minded souls on the downward slide.